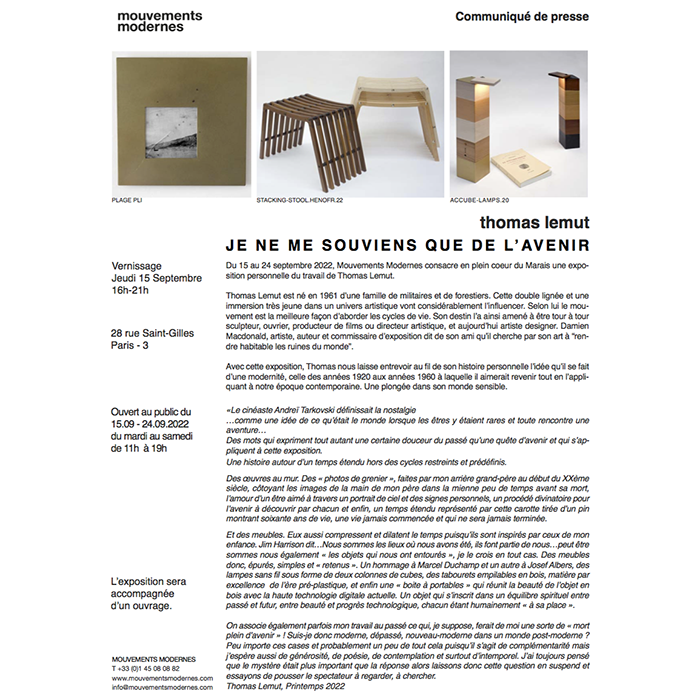 From 15 to 24 September 2022, Mouvements Modernes gallery dedicates a personal exhibition of Thomas Lemut ‘s work in the heart of the Marais.

Thomas Lemut was born in 1961 to a family of militaries and foresters. This double lineage and a very young immersion in an artistic universe will considerably influence him. According to him, movement is the best way to approach the cycles of life. His destiny has thus led him successively to work as a sculptor, a worker, a film producer, or an artistic director, and today an artist designer. Damien Macdo- nald, artist, author, and curator describes his friend as a man who seeks through his art to "make the ruins of the world habitable".

With this exhibition, Thomas lets us glimpse through his personal history his idea of modernity, that of the 1920s to the 1960s to which he would like to return while applying it to our contemporary time. A dive into his sensitive world.

«The filmmaker Andreï Tarkovski defined nostalgia
...as an idea of what the world was like when beings were rare and all encounters were an adventure... Words that express a certain sweetness of the past as well as a quest for the future and that apply to this exhibition.
A story about an extended time out of the restricted and predefined cycles.

Works on the wall. «Attic photos» taken by my great grandfather in the early 20th century, alongside my father's hand in mine shortly before his death, the love of a loved one through a sky portrait and per- sonal signs, a divinatory process for the future to be discovered by each and every one of us, and fi- nally, an extended time represented by this carrot pulled from a pine tree showing sixty years of life, a life that never began and will never be finished.

And furniture. They also compress and expand time as they are inspired by those of my childhood. Jim Harrison says...We are places where we have been, they are part of us...maybe we are also "objects that have surrounded us", I believe so anyway. Furniture then, uncluttered, simple and "restrained". A tribute to Marcel Duchamp and another to Josef Albers, wireless lamps in two cubes columns, wood stacking stools, the material by excellence of the pre-plastic era, and finally a " cell phone box " that com- bines the beauty of the wooden object with the current high digital technology. An object that is part of a spiritual balance between past and future, between beauty and technological progress, each one being humanly "in its place".

My work is also sometimes associated with the past, which I suppose would make me a kind of "dead man with a bright future"! So, am I modern, outdated, new-modern in a post-modern world? It doesn't matter what these categories are, and probably a bit of all of them, since it's about complementarity, but I also hope about generosity, poetry, contemplation and above all timelessness. I've always thought that mystery was more important than the answer so let's leave that question hanging and try to push the viewer to look, to investigate."