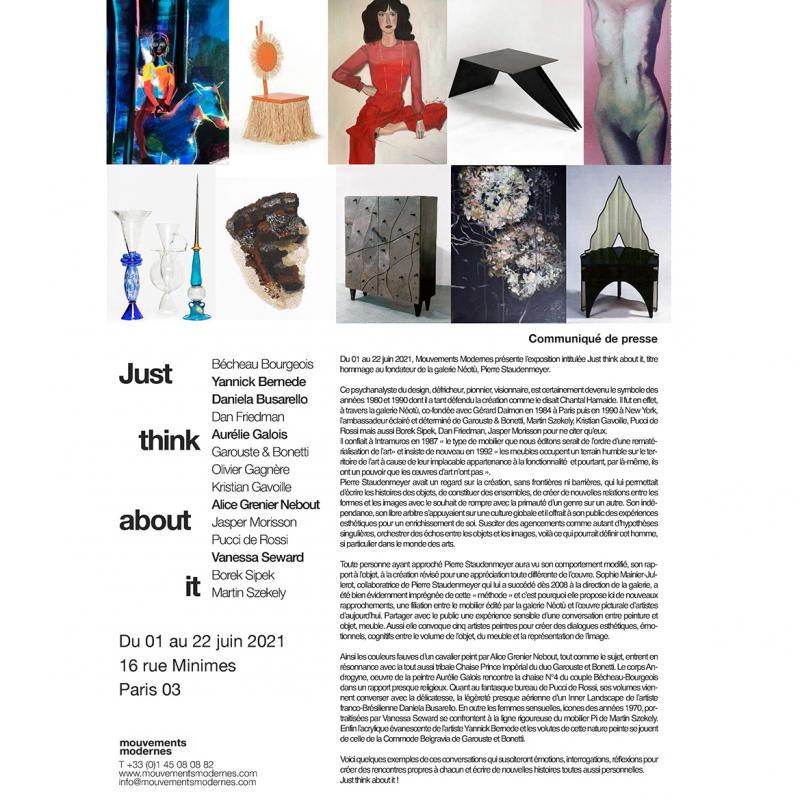 From 01st to 22nd June 2021, Mouvements Modernes presents an exhibition entitled Just think about it, a tribute to the late founder of Néotù gallery, Pierre Staudenmeyer.

Psychoanalyst of design, pioneer, visionary, he has become the icon of the 1980s and 1990s, when he defended its most creative designers with passion, as Chantal Hamaide said. Indeed, through Néotù gallery, co-founded with Gérard Dalmon in 1984 in Paris, then in 1990 in New York where he opened a branch, he has been the enlightened and determined ambassador of Garouste & Bonetti, Martin Szekely, Kristian Gavoille, Pucci de Rossi, as well as Borek Sipek, Dan Friedman, Jasper Morisson, to name just a few.

He told Intramuros design magazine in 1987 "the kind of furniture that we edit would be in a way, a rematerialization of art" and insisted again in 1992 "furniture occupies a humble part of the territory of art because of its implacable belonging to functionality and yet, by that very fact, it has a power that works of art do not have".

Pierre Staudenmeyer kept an eye on creation, without borders or barriers, which allowed him to write stories about objects, to constitute ensembles, to create new relationships between forms and images, with the wish to break with the primacy of one genre over another. His independence and free will were based on his global culture and he offered his public aesthetic experiences for self-enrichment. To create arrangements that could look like singular hypotheses, to orchestrate echoes between objects and images, this is what could define this man, so unique in the world of the arts.

Anyone who had the privilege to be close to Pierre Staudenmeyer will have seen one’s attitude changed, one’s relationship to the object and to creation revised to give a completely different appreciation of the work. Sophie Mainier-Jullerot, Pierre Staudenmeyer's collaborator who succeeded him as director of the gallery in 2008, has obviously been imbued with this "method" and this is why she is suggesting here new connections, a filiation between the furniture edited by Néotù gallery and the pictorial work of today's artists. To share with the public a sensitive experience of a dialogue between painting and object or furniture. She invites five painters to create aesthetic, emotional and cognitive dialogues between the volume of the object, the furniture and the representation of the image.

Thus the tawny colours of a horseman painted by Alice Grenier Nebout, like the subject, resonate with the equally tribal Prince Impérial Chair by the duo Garouste & Bonetti. The Androgynous body, a work by the painter Aurélie Galois, meets the chair N°4 by the couple Bécheau-Bourgeois in an almost religious relationship. As for Pucci de Rossi's whimsical desk, its volumes converse with the delicate, almost airy lightness, of an Inner Landscape by the Franco-Brazilian artist Daniela Busarello. In addition, the sensual women, icons of the 1970s, portrayed by Vanessa Seward are confronted with the rigorous line of Martin Szekely's Pi collection. Finally, the evanescent acrylics of the artist Yannick Bernede and the volutes of this painted nature play with the ones of the Belgravia chest of drawers by Garouste & Bonetti.

Here are a few examples of these dialogues that will raise emotions, questions and reflections in order to create unique encounters, and write new stories just as personal.

Just think about it !